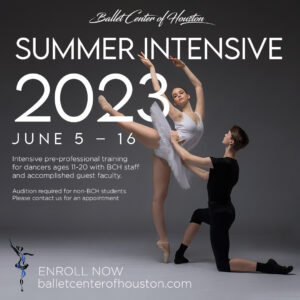 Summer Intensive is a two week program for our BCH Levels 6-10, comprised of classes taught by BCH faculty members and guest teachers from around the U.S and abroad.  Counted among past guest teachers are Clara Cravey, Dawn Scannell, Zachary Carrol, Roudolf Kharatian, Davida Haas, Jane Weiner, Kristy Nilsson, and many others. The program is normally offered during the first and second full weeks of June.

Registration: Current students please enroll online in the appropriate class as advised. (A 15% non-refundable deposit will be collected upon enrollment) Visiting students that we have been corresponding with will be advised of their group placement. Visiting or new students must arrange a placement class prior to registration.  Payments may be made on-line (see link on the bar above); check, cash or credit cards.  All placed students are encouraged to reserve their spot in the program by May 1 (a 15% non-refundable deposit) as we will limit the class sizes. Tuition balance will be posted mid-May and is due by May 31, 2023.

Louise Lester joined the artistic staff of Houston Ballet as ballet mistress in April 2004. Born in Yorkshire, England, Ms. Lester received her ballet training at The Royal Ballet School, White Lodge in London, and then graduated to the Upper School. In 1972, she joined the corps de ballet of Bavarian State Ballet in Munich, Germany. Shortly thereafter, Ms. Lester was promoted to principal dancer, performing the classical, neo-classical, and contemporary repertory. She had the great opportunity to work with a wide range of choreographers, including John Cranko, Peter Wright, Glen Tetley, Hans van Manen, Jiří Kylián, Rudi van Dantzig, William Forsythe, and Ohad Naharin. After an enjoyable career as a dancer she became ballet mistress for Bavarian State Ballet, where she remained until 1996.

In 1996, she began working as a guest teacher and coach with companies such as La Scala Ballet de Milano, Royal Danish Ballet, The Cullberg Ballet, Ballet du Rhin, Ballet du Nord, Staatsballett Hannover, Teatro Colón Buenos Aires, and Teatro Comunale Florence. Ms. Lester also staged several ballets for major companies, including Peter Wright’s production of The Sleeping Beauty at the Teatro Colón, Buenos Aires, and Teatro Municipal Santiago de Chile; John Neumeier’s production of The Nutcracker at the Semperoper Dresden in Germany; George Balanchine’s Serenade at the Teatro Municipal Santiago de Chile; and Concerto Barroco for the Ballet du Rhin in France. She was the assistant to the director of the Teatro Municipal Santiago de Chile from 2000 to 2003.

Windom joined the Cleveland/San Jose Ballet and expanded her repertory to include works by Dennis Nahat, Flemming Flindt and Kurt Jooss. She then danced professionally for Alonzo King’s Lines Ballet, Eric Hampton Dance and Washington Opera Ballet. This is her eleventh year as full-time faculty at The Washington School of Ballet where she has taught a range of levels from beginners to professional dancers of the company.

A sought-after teacher, coach, and mentor, she is valued for her ability to refine students’ training and to develop their artistry. Windom has a master’s degree in fine arts from the School of Dance at George Mason University in dance pedagogy where she has taught for the last ten years as an adjunct professor. She is a celebrated guest teacher around the country, bringing her emphasis on learning classical ballet with a strong approach of combining science and art. 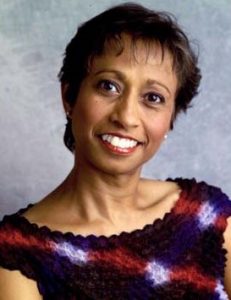 Priscilla Nathan Murphy brings the experience of more than 35 years of teaching. A 30 year tenure at Houston Ballet, which included an appointment to Principal of the Pre-School and Lower School Divisions, as well as 20 years of teaching at The High School For The Performing and Visual Arts , Houston, Texas.
Priscilla also has extensive experience in teaching workshops within the United States, Australia, China, Germany, Singapore, Japan and Barbados in areas of classical ballet, modern, improvisation, creative movement, to movement efficiency and teacher workshops. She has conducted workshops for international academic and educational organizations and provided guidance, creation and review of several syllabi for various establishments including Houston Ballet.
As a performer, Priscilla worked with various dance companies in Singapore and the U.S. to a Soloist level and as a choreographer she has created over 50 works for various companies and organizations including Houston Ballet II, Texas Ballet Theater (Summer Session), Houston Metropolitan Dance Company, University of Belhaven, several commissions for Texas Contemporary Dance Festival, Yoshikawa Dance Academy (Japan), Hubbard Street II and numerous works for The High School of Performing and Visual Arts to name a few. In recognition of her performing, teaching and choreographic expertise, Priscilla has been the recipient of numerous awards and scholarships throughout her career. 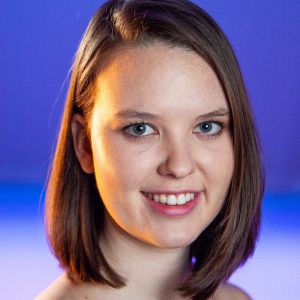 Kendall Jackson McLellan, BCH and HRB alumna, achieved her BFA in dance and graphic design from Belhaven University. At Belhaven, she had the privilege of having work created on her by Elizabeth Dishman, Steve Rooks, Brandon Welch, and Gabriel Speiller. She also had the pleasure of performing The Bench Quartet by Doug Varone restaged by Whitney Dufrene. Her training also includes Paul Taylor American Modern Dance Company, Dance Kaleidoscope, Complexions Contemporary Ballet, and American Dance Festival.  Kendall has previously been on staff at BCH teaching both ballet and Modern dance, company dancer with Kinetic Etchings in Jackson, MS, trainee with Dance Kaleidoscope, IN,